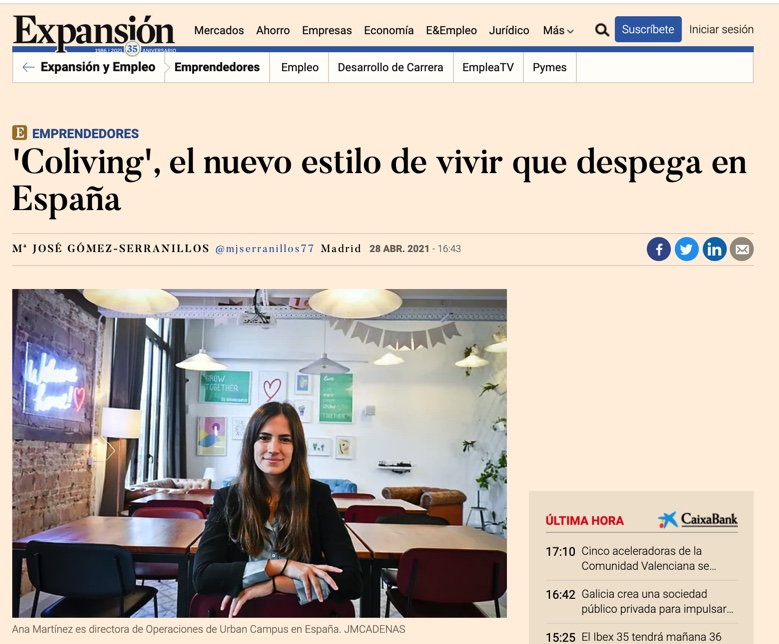 28 Avr ‘Coliving’, the new style of living that takes off in Spain

With a long track record in other countries, the residential model in which leisure spaces are shared and ?networking? is encouraged between residents, the “Coliving”, attracts foreign companies that want to expand in Madrid, Barcelona, and Valencia.

The interest for C0living, grows among young people in their 30s, many of them entrepreneurs or linked to creative professions. Coliving is a new style of living that attracts a tenant profile who seeks the privacy of a room with a bathroom but, at the same time, shares spaces with other residents of the building.

Projects in other countries such as England and the United States are popular, and now, coliving is gaining momentum in Spain, where this residential formula, in which you pay a monthly rent with the right to use your private space and access to common services, is becoming well-known. Coliving can be something similar to a university dorm, but with more facilities and addressed to professionals who are looking for a different lifestyle.

Madrid and Barcelona are the main cities, in which coliving companies, which have important expansion plans in Spain, land. One of them is Urban Campus, founded in Paris by Jonh Van Oost in 2016, an entrepreneur with years of experience in the real estate sector and investing in start-ups. A few weeks ago the company closed a financing round for seven million euros, a capital that will reinforce its growth in Europe. Madrid was the first European city where Urban Campus began its operations. Urban Camps already manages two complete buildings (120 units), located in the Argüelles et Malasaña neighborhoods. The spaces stand out for their colorful, functional, and optimized design, with monthly prices ranging between 700 and 1,600 euros. These rates include a room with its own bathroom, studio or apartments, WiFi, Netflix, cleaning service, and access to common spaces such as kitchen, dining room, terrace, and gym…  In a few minutes, the new tenant can formalize the renting process through their in-house developed platform, and move into their new residence for the desired period.

The head of operations of the company in Spain, Ana Martínez, explains that ?the tenant profile is between 27 and 40 years old and they are self-employed, employed by large corporations or professionals with experience who are studying an executive master’s degree ?. This professional diversity is sought after. ?We not only want to offer them a different experience on a personal level, but we also care about their personal development. We encourage networking among our clients which, on occasions, leads to new entrepreneurial projects ?, explains the manager. As a result of these professional relationships during the confinement, five projects arose. One of them, Martínez explains, is Copper Dating, a quick video dating app, launched by two residents of the Urban Campus. The company is already looking for new locations in other cities, such as Barcelona and Valencia, to reach 2,500 beds in two years.

New lifestyles, the rise of remote work by so-called digital nomads, and especially detachment from property among young people are the main reasons that Damien Harburguer sees in the growing demand for this residential model. This entrepreneur, of Argentine origin, launched Flipco last year, together with his partner Gabriel Honoré. “We are heading towards a new housing paradigm, especially among the younger generations. They feel very comfortable prioritizing use over property, ?argues the entrepreneur. If the coliving sector matures in the coming years, Harburguer sees a future in which changing homes or cities will be easier and more flexible, ?without investment in furniture, or high guarantees, deposits or complex contracts? , defends. The firm already has several apartments available in the Madrid neighborhood of Tetuán, with rents ranging between 400 and 830 euros, which give the right to services such as cleaning, gym, WiFi, and a workspace. Some buildings have roof terraces to relax at the end of the day. The company will gradually add new locations in the capital thanks to the agreement reached with the Israeli fund Argis. ?Our partner has invested 50 million euros in acquiring, renovating, and equipping new properties that we will take care of managing,? explains Harburguer. The new offer will be located in Madrid, Seville, Malaga, Valencia, and the Balearic Islands.

For Habyt, a firm born in Berlin in 2017, the Spanish market is also strategic. The injection of two million euros received in February helped it to acquire the Madrid-based coliving operator Erasmo’s Room, an operation with which it now has 500 beds, carried out months after its first purchase in the capital last year. The flats are located in different buildings, all of them located in central areas of the city such as Gran Vía, La Latina, Chueca, or Malasaña. Habyt has more than 1,000 units in Europe. “Southern Europe is a huge opportunity for us and this is where we want to continue studying new purchases to compete in this sector ?, highlights Edoard Archetti, the company’s marketing director.

On the other side of the Atlantic

Starcity is another of the foreign players making their way in Spain. Created in San Francisco, the cradle of global entrepreneurship, the company has raised more than 70 million dollars in financing (58 million euros). He landed in Barcelona in early 2020 at the hands of Esteve Almirall. After spending a few years in the US and seeing the possibilities of this residential model, he assembled the Starcity team for the expansion of the company in Spain, which currently has 150 beds in three buildings in Barcelona. ?In May we will open the first building in Madrid in the Tetuán neighborhood, an area that we see with great possibilities because it offers quality housing at reasonable prices, within the M30?, says Almirall, director of Starcity for Spain. The company offers prices between 500 and 900 euros per month with services included. ?One of our values ??is that we buy and manage the buildings. This is how we control the entire process of work, with a very careful design and furniture ?, he explains.

What about the future?

Almirall sees a future residential panorama where these shared homes will have more and more weight, ?being a business where large real estate companies will enter?. A scenario shared by Juan Manuel Pardo, director of the residential sector of the consulting firm JLL, who once again recalls the impossibility of the majority of young people to access a home that they own and as this shared option ?adapts very well to their demands ?. Labor mobility is, according to Pardo, another factor that will favor the rise of coliving. ?The INE assures that 12% of Spanish workers have changed municipalities in recent years, another indicator that reflects the opportunities of this formula as an option for a temporary residence until the place is achieved. suitable for the definitive one ?. And, like most emerging businesses, regulation takes longer to arrive. The JLL manager believes that a law that regulates coliving is essential, ?since it would speed up the implementation of the model and its better adaptation to the needs that society demands today,? he argues.

You can read the full article in Spanish here.