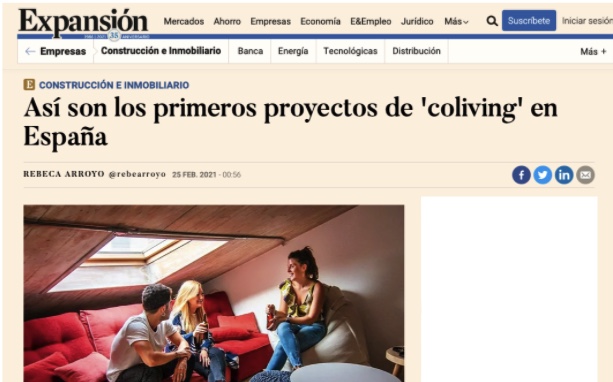 25 Fév The first ‘coliving’ projects in Spain by Expansión

Urban Campus was featured as one of the first Coliving operators in Spain in “Expansión” newspaper.

You can read the full article in Spanish or keep reading in English.

This is what the first ‘coliving’ project looks like in Spain

Renting a room or studio with cleaning and maintenance included and access to common areas, gym, movie theaters, cafeteria or workspaces: ‘coliving’ takes off in Spain.

Coliving, a model that allows like-minded people to coexist within the same communauté accueillante, offering F&B, WIFI, cleaning or maintenance services, takes off in Spain and does so thanks to operators such as Urban Campus, DoveVivo, Habyt, Homiii, Starcity, The Student Hotel, and Inedit.

In between student residences, hotels, and rental apartments, coliving offers the possibility of renting a room, in most cases with a private bathroom and kitchen, but also the usage of the building’s common spaces.  These common spaces are shared with other tenants with similar lifestyles and include work areas, a gym, a library, terraces, or even a laundry room. This formula was born in Silicon Valley, United States, and has already spread to several European cities such as London, Paris, Amsterdam, Manchester, Dublin, or Berlin. In Spain, it is still a very incipient phenomenon. According to JLL estimations, Madrid and Barcelona add up to more than 1,200 operational beds under the coliving model. Although focused on these large cities, operators are looking to other Spanish locations to expand their portfolios such as Seville, Valencia, San Sebastián, or Malaga. ?We are already seeing a growing investment appetite for this type of asset in the market, which is inspired by elements of the hotel, multi-family sector or as a link between the student residence and the habitual family home, but with a more professional approach ?, Explains Juan Manuel Pardo, director of Coliving at JLL Spain. 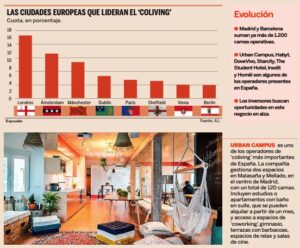 One of the most active operators in our country has been the French company Urban Campus. The group, founded by John van Oost and Maxime Armand, has five des résidences de coliving et coworking spaces in Madrid and plans to open 30 residential spaces in the next five years, in the main European cities, ten of them in Spain. Specifically, they want to have more than 2,500 residential units in Spain by 2023.

The Italian group DoveVivo, for its part, landed in Spain last year after the purchase of Oh My Place! and now manages a coliving space on Calle San Lorenzo in Madrid with 44 rooms, although its objective is to continue growing in Spain.

Habyt, founded in Berlin in 2017, has spaces in Madrid and Barcelona, ??while The Student Hotel, with 16 centers in Europe, has two hotels in Barcelona for students and professionals in the education sector and plans to open in Madrid in autumn 2021 and in San Sebastián in 2022, in addition to the third center in Barcelona also next year. Homiii, the commercial brand of the Excem “Socimi”, buy flats in the best areas of the cities, renovate them and equip them with WiFi and Netflix in Madrid, while Inèdit has managed several centers in Barcelona for a decade.

Starcity, with presence in San Francisco, Los Angeles, and Silicon Valley, which arrived in Spain through Barcelona Homes in 2020 and other operators such as Sun and Co in Jávea, The Hug, in Fuerteventura or Nine Coliving in Tenerife.

JLL foresees an expansion of the offer of beds in the upcoming years throughout the country of Spain and state that more and more international operators see an opportunity in the Spanish market due to its potential for travel.

?The current situation of coliving in Spain is marked by a regulatory complexity that makes it difficult for public administrations to qualify land use appropriately,? explains Pardo. In this sense, the lack of clear regulations in Spain makes it difficult to start new projects and clashes with the specific coliving regulations that the US has or the progress in the regulatory environment of cities such as London or Amsterdam. Coliving has adapted to the Covid, like other sectors, with the development of wellness programs, stricter cleaning protocols, and social distancing. According to JLL, in the current situation, coliving offers an opportunity for new revenue streams for the hotel sector, heavily penalized by Covid, given the similarity between the services and operations that both businesses have.

Urban Campus is one of the most important ‘coliving’ operators in Spain. The company manages two spaces in Malasaña and Mellado, in the center of Madrid, with a total of 120 beds. They include studios or apartments with an en-suite bathroom, which can be rented from one month on, and access to ‘coworking’ spaces, a gym, terraces with barbecues, relaxation areas, and movie theaters.