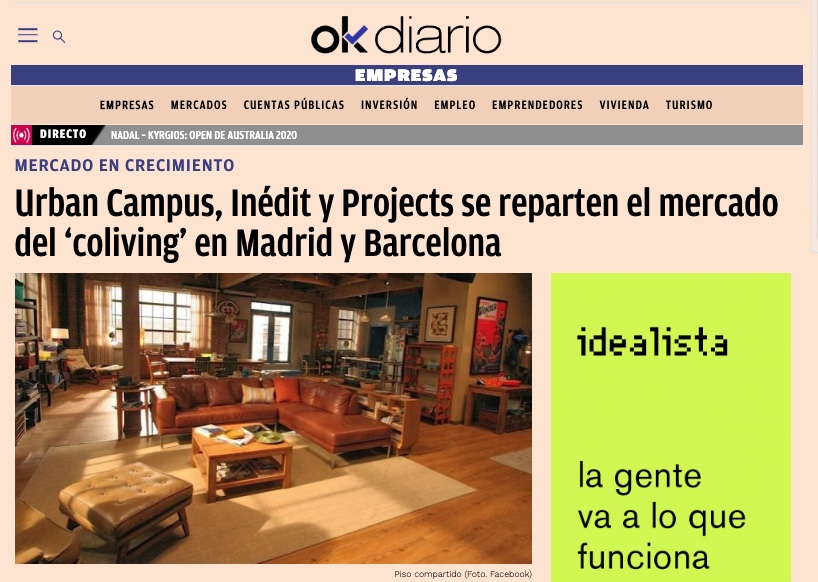 27 Jan Urban Campus among the Coliving keyplayers in Spain

OK Diario has named Urban Campus as one of the Coliving Key Players in Spain. Read the whole article in Spanish here, or keep reading the translation in English below.

Urban Campus, Inédit and Projects share the ?coliving? market in Madrid and Barcelona

2020 will be a year of growth for ?coliving?, a type of accommodation that consists of renting a private area (studio) in a property that also enables access to shared spaces and additional services.

Although the current offer is still very small in Spain, experts predict that ?coliving? will soon become the future of the real estate sector. Coliving will grow thanks to the high profitability offered to the owner – between 15% and 20% – and demographic trends.

The three companies that dominate this market in Madrid and Barcelona are Urban Campus, Inédit and Projets.

The French company Urban Campus was one of the first to land in the Spanish market. It has 120 single beds spread over two buildings in Madrid. They also design and operate two coworking spaces and a Foodlab (coworking space for gastronomic entrepreneurship with professional kitchen) in Spain’s capital.

The other big market operator is Inèdit, with 21 flats in Barcelona, ??a total of 113 rooms. (113 individual places). The Spanish company expects that in 2021 80% of companies dedicated to the sector will have an average of 250 beds. It also predicts that these types of properties will grow up to 40% by the middle of next year. Why is coliving becoming so popular? According to Inèdit, it’s due to the high profitability that it offers to investors and due to the increase of young professionals that move to Spain’s biggest cities every year.

Coliving spaces are mainly aimed at young professionals who want to live in a community, share experiences and who, generally, look to stay for periods that do not exceed 12 months. The average price of this type of accommodation is 900 euros per month.

Projets is one of the best-known operators in Europe. They operate in cities where the concept of ?coliving? is already well established, like Amsterdam or London. The German company has been operating in Madrid since April 2019 and has 25 rooms located in the district of Tetuan. The company expects to add 1,000 new homes throughout the world in 2020.

However one of the problems faced by this new business model, that’s affecting its development rate, is legislation. There is no specific coliving planning regulation: «Hotel or tourist apartment regulations do not adapt to this product. The absence of a solid legal framework causes a delay in its development, despite the enormous interest that has aroused both among users and investors” according to real estate consultant Savills Newman. The consultant believes that the new business model will also be another attraction factor to capture and retain talent in the labor market.