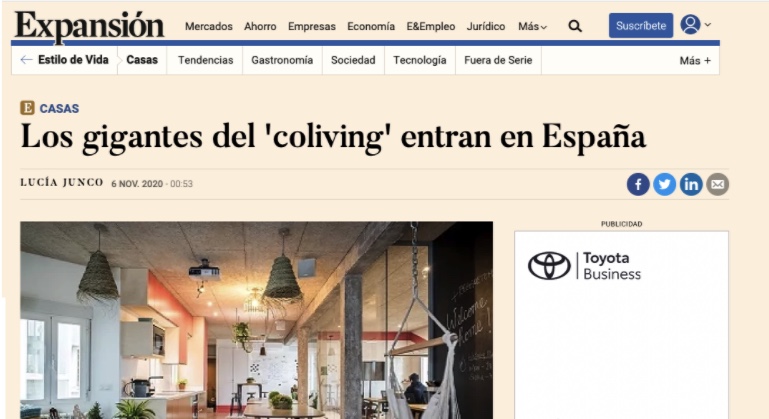 Posted at 16:02h in COLIVING, PRESS, URBAN CAMPUS IN THE PRESS by Author

The Giants of Coliving enter Spain

International operators such as Urban Campus, StarCity, Habyt or Dovevivo have already entered the national market and have very aggressive expansion plans for southern Europe.

In Madrid, Urban Campus  has 120 beds; Habyt 110 and Homii 180. In Barcelona there is almost a thousand, with The Student Hotel being the most active operator with 595 operational beds and another 3,000 on the way – they also plan on opening in Madrid, with 340 beds, and 328 projected in Sebastián–. You’ll also find in Barcelona Starcity, with 100 beds, and Inedit, with 113. Among future developments, Homii plans to expand its portfolio in Madrid, Barcelona, ​​Valencia, Seville, and Malaga. DoveVivo also plans to open in the capital city and in the city of Turia.

One of the markets that seems to go from strength to strength during the current economic and social uncertainty is home rental, and with it, coliving. This phenomenon was born in Silicon Valley after young people faced increasing difficulty finding affordable housing at the beginning of their careers. It is defined as a community and networking space, but also one that is residential. A kind of residence for students (but without an age limit) aimed at young professionals and freelancers, offering more sophisticated common areas such as spas, gyms, swimming pools and coworkings.

“Coliving means a different way of life. A life that’s more flexible, as all services are included in the rate, with an active community. A building where all the tenants are at the same point in life and where they can share experiences ”, explains Javier Caro, director of Coliving at CBRE.

Just as coworking implies better efficiency in using office spaces in densified city centers, coliving also allows better efficient occupancy by prioritizing high residential standards, at affordable prices. Prices usually include WiFi, utility bills, furniture, cleaning services and access to gyms. “In real estate terms, it is an operating asset that combines community management of a student residence, the services of a hotel and the stability of a residential asset, as a result of affordable rents, services on demand and high occupancies ”. In Spain coliving is receiving great recognition in the build to rent sector, largely due to the fact that less than 5% of the total market offer is under professional management “and there is a lack of this kind of experience within the accommodation sector ”, adds the CBRE executive.

International operators such as Urban Campus, StarCity, Habyt or Dovevivo have already entered the national market and have very aggressive expansion plans in southern Europe.

In the specific case of Spain, for the moment it is not a regulated market (we will see if the current Government is capable of restraining itself, with regards to coliving, in its Housing Law, defined with pride as the most interventionist on renting, in Europe). For now colivings can be operated as a residential or hotel asset. The types of rooms will depend on the demand, whether it is aimed at travellers, students (usually postgraduate), or young corporate professionals. As there is no current regulation, the rental agreements can range from 1 to 11 months (while the Urban Leasing Law establishes that the tenant can be linked to the house for 5 to 7 years).

As for prices, currently on average in Madrid rooms in colivings cost around 1,100 euros per month, more or less in line with the rental of a private studio of about 30 square meters, according to CBRE estimates. This makes Madrid one of the most expensive rental capitals in Europe. As some examples: in Amsterdam, a 30-square-meter studio costs less than 1,000 euros per month; in Vienna under 800 euros and in Berlin, 750 euros. In Milan coliving is not yet regulated either and average prices range from 410 euros per month for a basic room, to 1,000 for a bigger room. In Berlin, coliving rents vary from 599 euros in a shared apartment to 1,100 in a studio, with Germany being the most mature market for investing in micro-apartments (1.9 billion euros since 2015, according to CBRE).

COLIVING, URBAN CAMPUS IN THE PRESS